Story and photos by Laura Conaway

The third-generation cattleman, near Bunnell, Fla., has seen breed trends come and go; even tried a few himself. Now, with five years of Beefmaster bulls under his belt, heâ€™s found the breed to keep.

The soft-spoken rancher isnâ€™t one to push his opinion on another, though. In a room of opportunity, by choice his voice wonâ€™t carry. 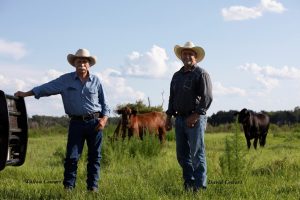 â€œI think riding out here, looking at them says a lot more than I can say,â€ Cowart says, placing the burden of proof on the cows that graze his land. â€œTake a look and youâ€™ll see what they [Beefmasters] can do in a cowherd.â€

A June afternoon spent doing so reveals the rancherâ€™s modest nature. In the house he designed by hand, overlooking the land heâ€™s managed well, he prefers his successes show off without him.

Under a canopy of oaks, where crickets and cicadas sing their song, youâ€™ll find Cowartâ€™s cows. Roaming 1,700 acres of pastureland, timberland and swampland, to scan the scene is to get a snapshot of native Florida, untouched. Itâ€™s just about 25 miles from some of the worldâ€™s most famous beaches, yet the cows pay no mind to that, content to graze the blankets of white clover and breathe in the ocean breeze.

â€œWeâ€™ll have mild winters, then cold winters, dry springs and wet summers,â€ Cowart explains, â€œbut one thing thatâ€™s always consistent is the heat and the humidity through the mid-summer, into the fall.â€

And if rain so happens to pour, the grass will surely grow.

Itâ€™s nice to have good Beefmaster cows to graze it when it does, Cowartâ€™s brother, David, adds.

The men were born into the business their grandfather dreamed into fruition. Their father kick-started their passion by gifting each child their very own heifer calf to start a herd. Decades past, no matter the pressures of regulations or urbanization, the Cowarts have long set their sights on seeing more dreams come alive on that coveted land. Perhaps through the watchful eyes of grandsons already on the ground.

â€œI wouldnâ€™t say itâ€™s been a bed of roses,â€ David says. â€œRanching teaches you thereâ€™s going to be highs and lows, but youâ€™ve just got to maintain and do the best you can. Youâ€™ll make it through.â€

Because when the dust settles, despite the ebbs and flows that seem to be the only constant of the modern cattle producer, itâ€™s cattle, like the commercial pairs that roam the Cowart Ranch, that remain the steady pulse of operations near and far.

â€œItâ€™s always important to have a good, dependable cow around,â€ Walton says. The good, dependable ones are the ones that are going to make you money in the long run, despite the market situation.

â€œIf theyâ€™ll consistently reproduce and have a good calf every year, thatâ€™s the name of the game right there. These Beefmaster cows are doing that for us.â€ 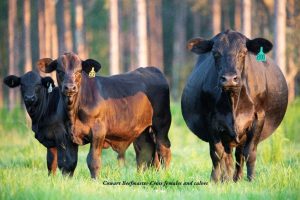 The Cowartâ€™s journey to the complementary breed wasnâ€™t always so defined, though. In 2015 they were looking to increase mothering capabilities by adding outside genetics to their closed herd of Angus and Brangus cows.

â€œWe wanted to improve our females,â€ Cowart says. â€œWe had good cattle but felt like, if weâ€™re going to stay in this business, then we needed to make our females even better.â€

While taking stock of some older cows on the ranch, the brothers noted some 18- and 19-year-old cows that were offspring of Beefmaster bulls used in the 80s. With longevity and fertility topping their list, they headed to Savannah, Tenn., and drove south with two Beefmaster bulls in tow.

â€œWe put those bulls on an isolated herd, and at weaning time the following year, the calves weighed heavier than all the rest,â€ David says.

â€œWe sold our first crop of Beefmaster calves in 2016 and they were the heaviest set of calves that we had weaned, ever,â€ he says.

Thick, growthy calves at weaning became custom from that point forward. Feedlots kept coming back for more steer calves, while their heifer mates fit seamlessly into the Florida herd as replacements.

â€œWeâ€™ve had what we felt like were good cows all along,â€ Walton says, â€œbut I firmly believe that if you donâ€™t buy bulls that are better than what cows youâ€™ve got, then youâ€™re not making any improvements at that point.â€

Beefmasters have made all the difference.

â€œTheyâ€™re just good momma cows when you get right down to it,â€ Walton says. His comment doesnâ€™t come off as surprised, rather, heâ€™s still taken aback by what Beefmasters bring to the table all these years later.

The goal is to have something to either take to market or put back into the herd. A cow that raises good calves that wean heavy; one thatâ€™ll breed back every year.

A cow you can depend on is money in your pocket. A cow you can build on, like the Beefmaster, is a guaranteed pay day.

â€œIf youâ€™re going to stay in this business, you want the very best that does the best for you,â€ David says.

Honing in on adaptability and the maternal traits synonymous with the breed, the ranchers seem satisfied with the choices theyâ€™ve made as their proof grazes the morning dew.

Nestled along the tree line of towering Pines, a young calf rests near a patch of overgrown palmettos, cool and just out of reach. Riding through the herd, looking at cows with hearty calves by their side, thatâ€™s the life the Cowarts have known since birth, the passion shared by many just like them.

â€œIt puts a smile on my face to see that we are making progress and we have a goal for the future,â€ David says.

He looks out at those Beefmaster females, young and thriving. â€œAs long as weâ€™re going forward and not encountering setbacks, then I feel like weâ€™re achieving something.â€