Inspired By the Land

Story and Photos By Tahlia Warrick

Fisheating Creek winds through wetlands, prairies, hammocks and woodlands as it makes its way through Highlands and Glades counties to reach Lake Okeechobee in south central Florida. It is the last natural tributary to the lake.

Through the years, the creek has inspired recreation, conservation, art and adventure. Most recently, the creek and its surrounding lands inspired a new author. 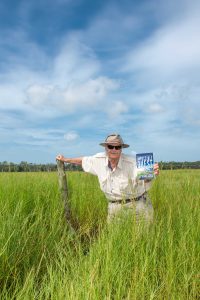 Dr. Richard Karlson, a Glades Electric Cooperative member from Lake Placid, published his first book this summer. â€œImpossible Quest: One Manâ€™s Journey for Adventure on the Last Frontierâ€ details accounts from Richardâ€™s life as a conservationist, hunter and rancher along the creekâ€™s basin outside Venus.

Originally from Long Island, New York, Richard moved to Pompano Beach as a young man to open an orthodontic practice. An avid hunter and pilot, he frequently took to the skies in search of new places to hunt. He soon realized most of the wild lands surrounding Pompano Beach would be lost to development.

â€œIt was getting so built up,â€ Richard says. â€œI used to go quail hunting with a friend of mine west of Pompano Beach. Pretty soon, the concrete jungle started going over everything, and we had no place left to hunt.â€

In search of a new place to land, Richard searched from the air, spotting the parcel of land along Fisheating Creek he would later buy and work to preserve.

Richard initially bought land along the creek to serve as a hunting camp for private use. But he eventually moved his family to Highlands County, and his use for the land evolved.

â€œWhen I bought the land, it was just natural prairie grass, and everybody around was in the cattle business,â€ he says. â€œI was looking to do something productive with it, and cattle were a natural fit.â€

Today, Richard manages a portion of the land as a cow-calf operation and a portion as a natural wildlife preserve, which he has left untouched. His son manages citrus groves and a citrus nursery on drier parts of the property, away from the creek.

â€œI didnâ€™t want to bulldoze it all down and change it,â€ Richard says. â€œI wanted to leave something in its original state.

â€œThatâ€™s my hobby: trying to keep it as pristine as possible.â€ 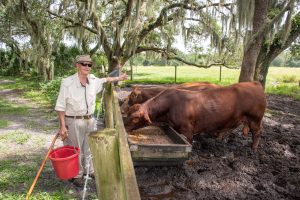 In managing his herd of Beefmaster cattle, Richard is intentional about selecting the most suitable forages and practices for grazing near the environmentally sensitive Fisheating Creek basin.

â€œWe planted Hermarthia grass (or Limpograss) with the help of UF/IFAS Extension Services,â€ he says. â€œWe were the first ones to plant it in Highlands County. Our ranch is a perfect combination: half wetlands in the headwaters of Fisheating Creek and half higher ground.

â€œDuring the winter dry months, the grass will support a herd of 140 cowsâ€”almost one cow per acreâ€”in contrast to some of my neighbors on higher ground who have to buy hay to supplement.â€

Richard says he has faced many challenges through the yearsâ€”from encounters with wildlife to dealings with real estate developers. Despite the obstacles, he remains determined to preserve and protect this unique piece of Florida.

That mission has sent him on many adventures, which inspired his book.

â€œMy efforts were to try to preserve the pristine wildlife corridor that runs along Fisheating Creek from Palmdale up almost to Highlands Hammock State Park,â€ Richard says. â€œIt was a great effort to succeed in doing that. These are the stories that came from it.â€

When talking with friends and acquaintances, it wasnâ€™t unusual for Richard to recount experiences of close encounters with alligators or unruly trespassers. He was often told his stories should be in a book.

â€œThese are all true stories that I thought people would find interesting, especially people familiar with the area,â€ Richard says. â€œA lot of our friends never even knew these things happened.â€ 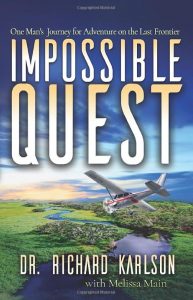 Richard worked with Melissa Main, his co-author, to bring the stories to life.

â€œI learned that I wish I had kept a diary, a daily diary, of everything thatâ€™s happened in my life,â€ he says. â€œThe hardest thing was trying to go back over 50 years and try to keep everything in perfect sequence. I was thankful I had someone like Melissa who would research and check things.â€

Richardâ€™s stories come from a lifetime spent trying to preserve a piece of Floridaâ€™s heartland. He is not ready to give up the fight just yet.

A proposed toll road has the potential to fall west of Fisheating Creek basin. Richard says he hopes the new road does not encroach on the pristine area surrounding the creek.