Building for the Future: Breeder of the Year meets growing demand for quality genetics

By Chel Terrell, The Beefmaster Cowman

Growing demand for Beefmaster genetics in the commercial industry has skyrocketed in recent years as seedstock producers strive to develop genetics that not only meet customer demand, they exceed their expectations. Gaining this kind of traction in the commercial realm doesnâ€™t happen overnight â€“ it takes years of diligent work, making tough decisions with patience and fortitude to mold and develop a program into a premier operation that ultimately achieves this purpose. 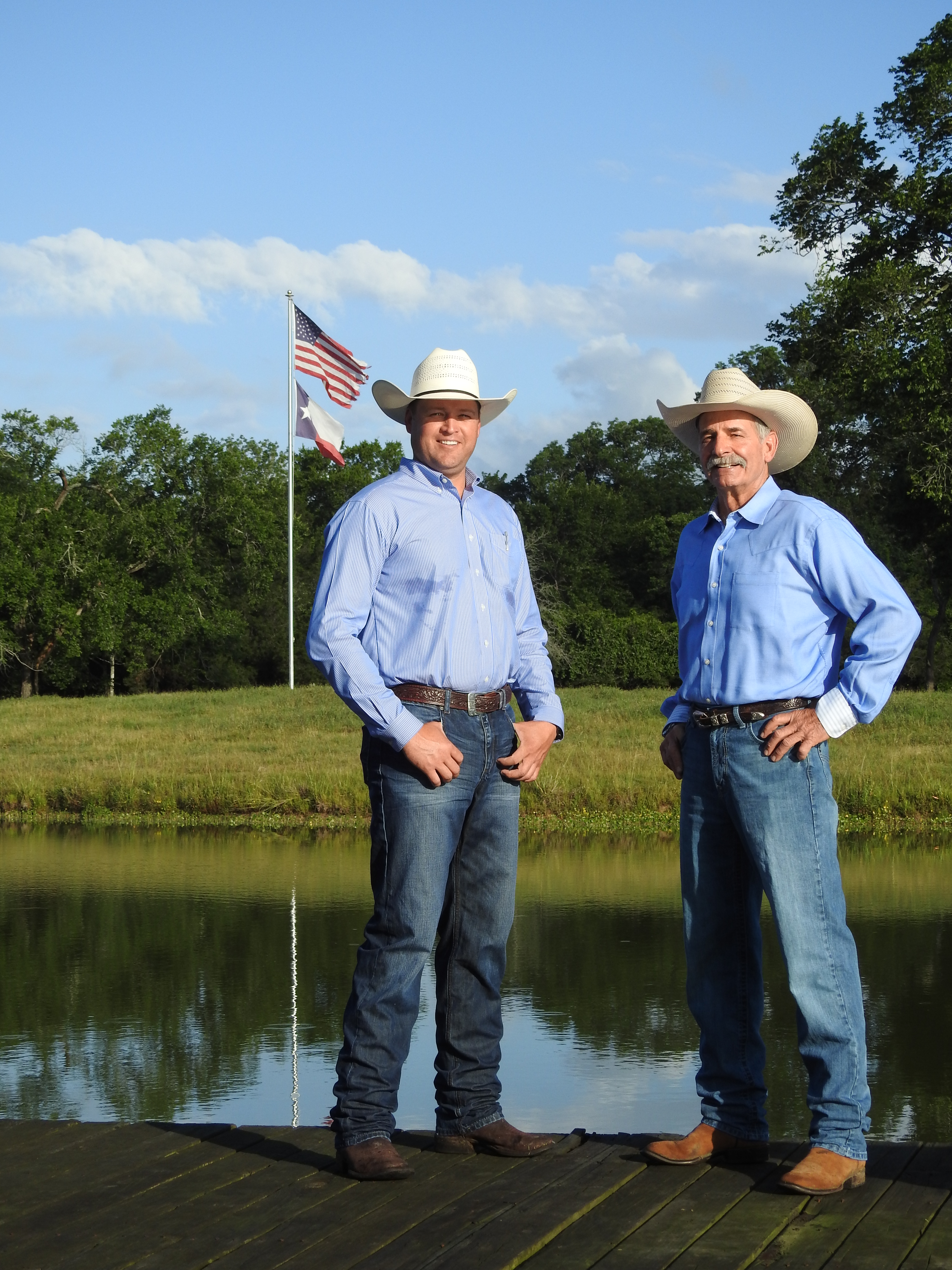 Derek Frenzel, Temple, Texas, and Larry Meacham, Cat Spring, Texas, two of the leading breeders driving efforts to expand the commercial market for Beefmaster genetics, combined forces in 2009 and established F&M Cattle Co. (FMC). Their forward-thinking partnership has led to growth in Beefmaster sales across the country thanks to their continued focus on utilizing performance data and strict culling practices to improve their breeding program while eagerly helping other breeders achieve success and further the impact of Beefmasters as well. Beefmaster Breeders United (BBU) recognized these efforts by selecting FMC as the 2019 BBU Breeder of the Year during their annual convention last fall.

Reaching this pinnacle in the breed took diligent effort. When Frenzel and Meacham combined personal herds and purchased several outside herds in 2009 â€“ moving cattle to a ranch in Salado, Texas â€“ they began using a 60-day calving season and culled cows for low fertility and performance.

â€œWe quickly realized that not all Beefmaster cattle were equal to what we had been raising. We operate on a low input environment and these cows couldnâ€™t withstand what they were subjected to,â€ Frenzel said. â€œSo those first few years we culled pretty ruthlessly for fertility, color and udders and were left with a nucleus of productive cows to advance our purebred program.â€

This â€œbaseâ€ set of cows serves as the foundation for FMCâ€™s replacement females. â€œWe sold some of our oldest cows last year (ranging from 10 to 18 years old) to one of our customers and now our cowherd is a little bit younger,â€ Frenzel said. â€œWe maintain strict 45- to 60-day calving and breeding seasons and develop all our heifers. We turn a lot of cows over, so we have to have a lot of replacements for that.â€

They continued improving genetics with bull power, a cornerstone of the FMC operation since its inception. â€œWe started by selecting top end bulls from performance tests to build our herd and analyzed the udders and production records of their dams before bringing them into the herd,â€ Frenzel said.

Customer-Focused Mindset and the Power of Performance

From the outset, Frenzel and Meacham set a goal to produce quality Beefmaster bulls for the commercial cowman. With customers spanning across the United States and internationally, theyâ€™ve honed their program to meet the growing demand for cattle that can perform in widely varied regions.

â€œWe sell bulls to buyers from Florida to Oregon and other parts of the country. Youâ€™ve got to identify which genetics really work in those particular regions and build bulls to suit your customer base,â€ Meacham said. â€œThatâ€™s really part of the success that weâ€™ve had â€“ listening to our customer.â€

â€œWeâ€™re trying to produce an easier fleshing, moderate, heavier boned bull that doesnâ€™t have to be massive, but does have to be above average,â€ Frenzel said. â€œHeâ€™s got to be able to go out there and make a living.â€ 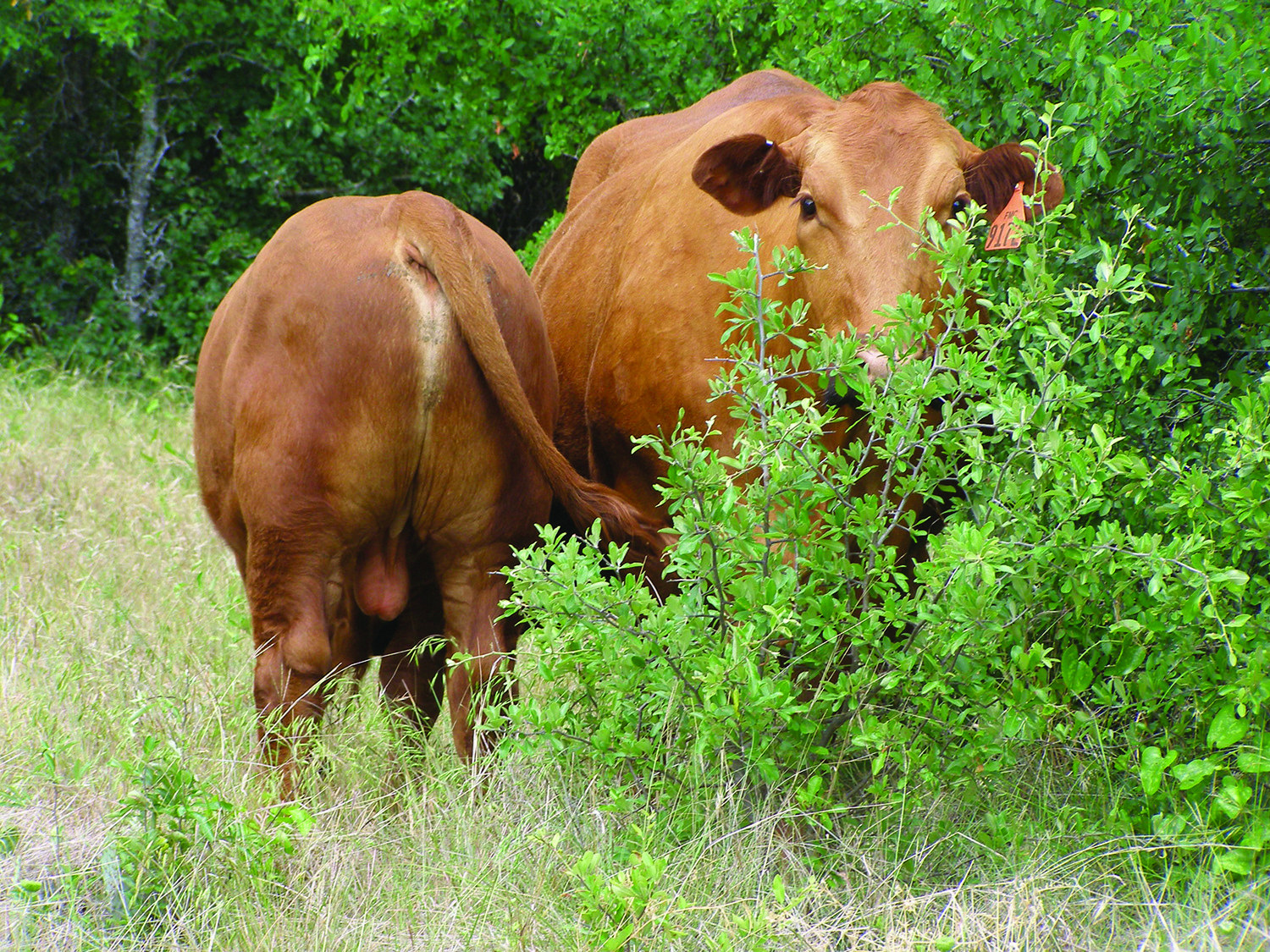 Cows arenâ€™t cut any slack either. â€œWe run cattle in four regions across Texas, and one thing weâ€™ve learned from ranching in these various areas is the type of cow that it takes to survive and thrive,â€ Frenzel said. â€œWe try to raise a more moderate cow that fits the wide variety of environments where our customers are located. I think we â€˜ranchâ€™ cows a little bit harder than most breeders and thatâ€™s what our commercial customers are doing, so weâ€™ve got to be just as hard on them. If we find cows that are a little bit more moderate size and easy fleshing, plus feed efficient, thatâ€™s what weâ€™re going for.â€

They pride themselves on strictly following the Foundation philosophy but concentrating on more phenotype. â€œOur customers can get the best of both worlds knowing they can buy from a program that stresses fertility, udder and color,â€ Frenzel said. â€œMaking everything solid colored to fit the commercial industry is a big focus for us, but we also have the phenotype to go along with it.â€

A driving force for many of the decisions to advance the FMC herd and meet growing customer demand is data collection. â€œOur goal is to move our herd and the breed forward by measuring everything possible and utilizing all the newest tools available,â€ Meacham said.

Cattle are run in large multi-sire pastures; therefore, DNA is collected on every calf born so it can be parent verified and receive a genomic EPD. They also record weaning and yearling weights and ultrasound data as part of BBUâ€™s Whole Herd Reporting program.

In 2016, Frenzel and Meacham, along with two other breeders, formed the Beef Development Group and invested in a GrowSafeÂ® system to collect and monitor feed efficiency data. FMC tests every keeper bull and all heifers with the system, utilizing that data to select replacement females. Their commercial customers are also benefiting from the additional information, enabling them to make better decisions when buying bulls or replacements.

â€œWe made the decision to purchase a GrowSafe system because we really felt like Residual Feed Intake (RFI) was something that is not only important today, but that will be extremely relevant in years to come,â€ Meacham said. â€œWe all talk about how Beefmasters are easy keepers and how they perform very well. But most people werenâ€™t really measuring that. Now weâ€™re measuring it and bringing that to the table. Thereâ€™s a lot more interest in feed efficiency today, and we are kind of pioneering that in our breed and hopefully going to see the association develop an EDP for it. Weâ€™ll see what happens in years to come, but thereâ€™s a lot of benefit for cattle producers in cutting 10 percent of your feed costs, for example. Thatâ€™s a major chunk of money.â€

Staying ahead of the competition is also crucial for the Beefmaster breed.

â€œI think measuring feed intake is very important to our breed. Youâ€™ve got to separate yourself in an industry thatâ€™s very competitive. I think efficiency is a big part of why Beefmasters work as well as they do. Through GrowSafe, weâ€™re able to test for it and prove that,â€ Meacham said.

In addition to collecting data to improve herd genetics, Frenzel and Meacham utilize artificial insemination and embryo transfer technology. â€œWeâ€™ll put in about 40 to 50 embryos this year and AI all of our first-year replacement heifers,â€ Frenzel said.

â€œWeâ€™re using all tools available to push that marker forward in our breeding program and try to get better and better,â€ Meacham said. â€œYou canâ€™t lose sight of any of opportunity to improve.â€

FMC markets cattle through several avenues, including private treaty, the three annual Beef On Forage sales and the fall Maternal Compass sale. Along with purebred herds, many of the bulls they have raised can be found in the top 25 largest cow-calf operations in the country. They also purchase bulls from breeders within their Beef on Forage group and ones that participate in the Beef On Forage bull test â€“ herds with similar breeding philosophies.

â€œWeâ€™re raising bulls that go through this program, so we need to stack that back on top of each other,â€ Frenzel said. Theyâ€™ll keep their top 50 heifers each year as replacements, then develop the other females on oats and sell them to seedstock breeders or commercial producers.

Frenzel manages the Beef On Forage bull test, which has been in operation for over 30 years and is the largest performance test in the breed, marketing over 300 bulls and 75 females annually at sales in Texas, Oklahoma and Florida. The forage-based performance test enables breeders to select bulls that fit their specific environment by testing them against each other in large contemporary groups. Feed efficiency data is collected using the GrowSafe system and participants are provided current weights, scrotal measurements, EDPs and scan and gain data as well as Fleshing Ability Scores. The group has tested over 1,000 bulls and females to date.

â€œOur priority is to develop bulls for the true working rancher that perform in the real-world environment,â€ Frenzel said. â€œNot all bulls are created equal, and itâ€™s our job to identify superior genetics.â€

One of the premier bulls owned and marketed by FMC and coming out of the Beef On Forage test is the 1001 bull. â€œHeâ€™s produced McAlester and Summit, two of our really highly promoted bulls that we and other breeders have been successful with,â€ Frenzel said.

â€œHeâ€™s still the number one ribeye bull in the breed and we utilize his genetics quite a bit to flush,â€ Meacham said.

Focused on the Future

For the duo, participation in association activities as well as at state and national level events is an important aspect of promoting both the FMC herd and the entire Beefmaster breed. Meacham, a BBU lifetime member, and Frenzel, who has been a member of the association for over 20 years, have both served on the BBU Board of Directors, as members of multiple committees, several satellites, including Central Texas BBA, Central States BBA and Arkansas BBA and the Texoma Beefmaster Marketing Group. Youâ€™ll find them actively promoting the breed at Texas and Southwestern Cattle Raisers Association (TSCRA) and National Cattlemenâ€™s Beef Association (NCBA) events, too.

They are also financial contributors to the Beefmaster Educational Endowment Foundation (B.E.E.F.) and run the Flying B test heifers through their GrowSafe system for BBU and will be giving several donors to Texas A&M University to flush for the new Beefmaster herd.

â€œServing on the Board, on committees and promoting and supporting the breed through various avenues is a way to stay involved, especially when you have the opportunity to relay important information to other breeders and commercial cattlemen,â€ Meacham said. â€œIf youâ€™re going to separate yourself from other breeders you need to set an example, whether someone follows your lead or at least utilizes some of the information you provide. If youâ€™re going to push yourself to the top, itâ€™s really important.â€

Helping other breeders, especially new breeders, realize their own success with Beefmaster genetics is essential to the pair, as they know a rising tide lifts all boats. After years in the business, they can offer some valuable insight to help these programs move forward.

â€œFirst, go buy an iron set of cows and put the best bull you can afford on them. Keep those heifers out of him and breed up from that point,â€ Frenzel advises. â€œItâ€™s too hard to go to sales every weekend and put together cows from multiple locations thatâ€™ll fit your environment.â€

Patience is also paramount. â€œThis is a marathon, not a sprint,â€ Meacham stresses. â€œNo matter how much money you throw at it, youâ€™re not going to make it happen quickly. It takes time to reach goals in your breeding program, to really mold your program to where you feel like youâ€™ve got a good set of cows that you can carry forward on the registered end.â€

And when you reach a set of goals, itâ€™s time to move the needle and set new ones so the fruits of your efforts pay off again, they emphasize.

â€œItâ€™s a never-ending cycle and you canâ€™t ever let off the throttle because youâ€™ll fall behind,â€ Frenzel said. â€œWe have to stay focused on the future and take steps to maximize what weâ€™re doing to stay on top.â€