MONTICELLO, Arkansas — The cattle herd at the University of Arkansas at Monticello is getting an upgrade, receiving more than two dozen hand-picked Beefmaster cows and calves donated by James and Mary Ann Skelton of Springdale.

“I didn’t want UAM to have any scrubs,” the 77-year-old James Skelton. “I’m selling down, so I donated the better end of my cows.”

At one time, Skelton and his brother managed more than 300 head of Beefmaster cattle. 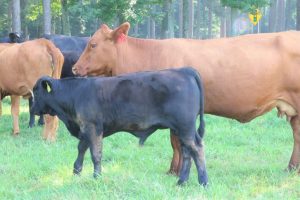 “My brother got out of the business, and now it’s just my two sons,” Skelton said. “We have about 60 cows. They, too, are now wanting out of the cattle business. So, it’s a good time.”

UAM has had cattle on its campus for a long time, beginning as a research and demonstration herd managed by the University of Arkansas System Division of Agriculture’s Southeast Research and Extension Center. When the Center closed, the herd was transferred to UAM.

“With the switch of ownership, so did the focus of the cattle operation. We were suddenly tasked with the need for our cattle to produce calves for revenue so that the farm could financially stand on its own,” said Rocky Lindsey, veterinarian and associate professor animal science.

UAM farm manager Greg Montgomery said the donated cattle, which arrived in May, have excellent traits that help elevate the quality of the UAM herd. 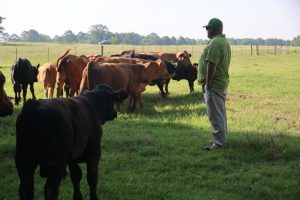 “We are getting some proven genetics,” said Montgomery.

“There are three boxes we are trying to check. The first is visual assessment; we want them to look pretty as you go down the road. The next two boxes included pedigree: what ancestry do they have, and have they produced recognizable genetics?” he said.

“The third box is EPDs or expected progeny differences. All three things can get very complex, but it’s pretty simple once you know the process. If we are checking all three boxes, we are upgrading our cattle,” Montgomery said.

“They have the bloodline; they get a number, the animal’s birth weight is recorded, weaning weight and yearling weight. By the time you’re done, you have a huge database to help improve the quality of your herd,” he said.

UAM doesn’t often enter competitions with its livestock. However, this past year Montgomery and a student tested the waters at the Arkansas State Fair. The result was a measuring stick.

“The results couldn’t have been better,” Montgomery said. “We were at the state fair in 2021. We had a heifer and a bull. Our bull won Arkansas Champion and Grand Champion Beefmaster Bull.

“We walked out of there with a lot of purple ribbons. For me, it was the first time I’d ever done that,” he said. “Even as a kid, I had never won the state fair. It was cool to do that for the university and a cool thing for me.” 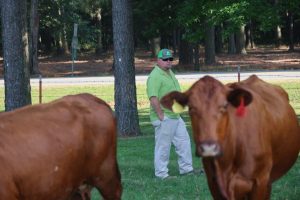 Montgomery said UAM student Rayvin Callaway showed the cattle and “she did a wonderful job. Kudos to her for the work she has done. We hope to have more student interaction in the future in showing our cattle.”

“The goals for the herd with University of Arkansas System Division of Agriculture were teaching and research. Generating revenue through cattle sales was not the focus,” said Lindsey. “We’re still going to use them as a teaching herd and perform quality research, but the focus has changed since UAM took ownership of the cattle. We now want to help the UAM farm grow and support itself.”

“We can brand our UAM university name and become well-known. We are starting to become known as a quality Beefmaster breeder. This gives added value to our cattle,” said Lindsey.

“Everything we do out here on this cow farm, there will be a student involved,” said Montgomery. “Ultimately everything we do to improve the college’s herd; the student is involved 100% hands-on.  As the herd gains more notoriety, the university also builds its name and reputation. Meaning more opportunities for the student.”

Skelton became familiar with the UAM breeding program about five years ago. At that time, Bill Pendergrass, executive vice president of Beefmasters Breeders United, told Skelton that UAM needed a bull to breed their cows. Skelton called Montgomery and told them that the school he could use one of his top bulls for a few months. The bull was a top five ranked Beefmaster. The bull and cows did their job producing top calves. However, closure of the Southeast Research and Extension Center meant Montgomery had to start over.

The current “donation we received was very beneficial, no strings attached,” Lindsey said. “Some of the cattle we were initially going to sell, the donation agreement allowed us to do that, but instead, the quality of the animals we received was incredibly good. Those cows and calves will now be incorporated into our existing breeding program.”

About the College of Forestry, Agriculture and Natural Resources and the Arkansas Forest Resources Center

The University of Arkansas at Monticello and the University of Arkansas System Division of Agriculture offer all of their programs to all eligible persons without regard to race, color, sex, gender identity, sexual orientation, national origin, religion, age, disability, marital or veteran status, genetic information, or any other legally protected status, and are Affirmative Action/Equal Opportunity Employers.

About the Division of Agriculture

The University of Arkansas System Division of Agriculture’s mission is to strengthen agriculture, communities, and families by connecting trusted research to the adoption of best practices. Through the Agricultural Experiment Station and the Cooperative Extension Service, the Division of Agriculture conducts research and extension work within the nation’s historic land grant education system.

The Division of Agriculture is one of 20 entities within the University of Arkansas System. It has offices in all 75 counties in Arkansas and faculty on five system campuses.

The University of Arkansas System Division of Agriculture offers all its Extension and Research programs and services without regard to race, color, sex, gender identity, sexual orientation, national origin, religion, age, disability, marital or veteran status, genetic information, or any other legally protected status, and is an Affirmative Action/Equal Opportunity Employer.

University of Arkansas at Monticello

U of A System Division of Agriculture