Located in central Mississippi, just outside of French Camp, is a Beefmaster operation filled with quality cattle and a deep love for the beef industry. Owned by Aaron Roebuck and his wife Mona, the two proudly comprise the operation known as Rocking R Ranch Beefmasters. 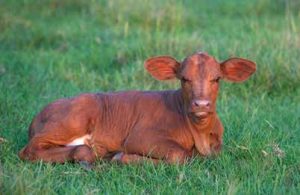 The Beefmaster breed first originated in 1954 based on a 3-way cross between Hereford, Shorthorn, and Brahman cattle. Tom Lasater, the founder of the breed, selected cattle on the “Six Essentials” which include fertility, milking ability, weight, conformation, hardiness, and disposition. Since then, the breed has grown in popularity among many producers just like the Roebucks.

Aaron first got his start back in 1986 when he purchased his first cow from a sale barn and sold her first calf to begin his herd of commercial cattle. Roebuck then purchased his first Beefmaster bull from Mr. Johnny Sides and ran cattle for several years before deciding to sell out.

During the 1990’s, Aaron’s son Austin became interested in cattle and decided to obtain a youth loan. After looking in the Market Bulletin, they saw an ad for Beefmaster cattle from the Byrd family in South Mississippi and decided to go look. They went to look with the original plan of Austin building for himself a herd of cattle versus purchasing cattle with the primary goal of showing.

It was a productive visit and it resulted in the purchase of five heifers, with several of them being great show prospects. Though Aaron was raised showing horses, he had never shown cattle; however, that didn’t keep Austin from being interested in the idea. The Roebuck family made the decision to go “all in” and Austin began showing on a state and national level.

Since then, Austin has become an established veteran in the show ring and has attended several Junior Beefmaster Breeders Association Jr. Nationals, as well as national shows in both Houston and Fort Worth. Though Austin has now aged out, he continued his own herd of Beefmasters. Aaron has even got the showing bug by participating in open shows and exhibiting a bull that was raised on their farm. 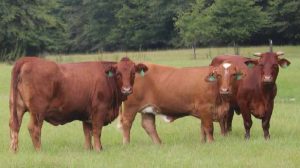 “Hopefully one day I will have grandkids that are interested in showing,” said Aaron. “We have had some really good heifers the past few years that are made for the showring, and it’s been a large part of our lives.”

As he has built his herd over the years, Aaron has purchased cattle private treaty and at Southeast Beefmaster Breeders Association (SEBBA) sales, as well as Emmons Ranch and BBU sales at Houston.

Using both artificial insemination and natural service, the cows are bred to superior Beefmaster bulls, producing hardy cattle that are adapted to the Gulf Coast environment. By utilizing some of the top AI sires in the breed along with Gunslinger, a bull that he owns in syndicate, and his herd sire EMS Cool Daddy, Roebuck is building a herd of cattle that will work in the show ring and for seedstock and commercial producers alike.

While he is currently in the process of building his herd, most of his heifers are retained to put back into the herd, and many of his bull calves are sold to the local livestock markets. His son Justin is also building a herd of Angus and Angus cross commercial cows that he is utilizing Beefmaster bulls to create. 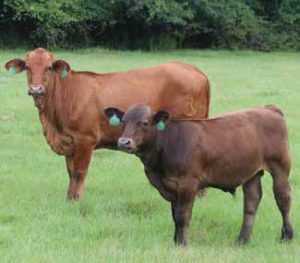 If you spend any time with the Roebucks and their cattle you see that docility is a major factor in their herd. “You can see that most of our cattle are pets,” said Aaron. “We come out to the pasture and most all of them will walk up to you and let you handle them.”

All cows and calves on Rocking R Beefmasters are maintained under a complete herd health program where cattle are vaccinated and dewormed twice a year, as well as being given a 7-way and blackleg vaccine. Common Bermuda along with mixed native grasses provides the foundation of the pasture system and all the farm’s hay needs. With the help of his son, Justin, Aaron bales his own hay.

Aaron is a proud member of the Mississippi Cattlemen’s Association, where he serves as an area vice president. He is also a member of Beefmaster Breeders United.

While he is certainly proud of his growing herd and operation, one thing that Aaron is always proud to say is that his family is still on the land that was a land grant by the government to his great-great grandparents. From those original 140 acres, several other family members, as well as Aaron, have added to the original property, with several cousins owning adjacent property as well.

The Roebucks continue to improve their herd each year by breeding quality genetics to produce cattle for today’s cattle producer.