The Beefmaster Breeders United (BBU) Hall of Fame has been established to honor the exceptional, visionary men and women who have made outstanding contributions to the Beefmaster breed. Fred and Judy Long, owners of the L2 Ranch in Beeville, Texas were inducted into the 2021 BBU Hall of Fame. 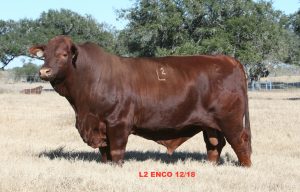 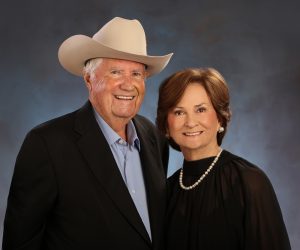 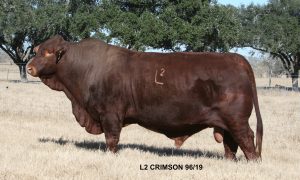 For the Longs it is clearly a great honor to be inducted into the BBU Hall of Fame at the 2021 BBU Convention.

Fred joined BBU in 1976. His goal was to breed a Beefmaster herd that was phenotypically correct and carried solid performance traits based on “The Six Essentials”. In the development of his program, he added an additional essential trait to represent the importance of predictability of the animal’s phenotype and performance traits which he calls the Seventh Essential. This balanced in breeding is a focus on every evaluative trait. He identifies their breeding program as L2 7 Essentials Total Balance Performance Breeding. The herd was developed on the strength of the maternal cow and that bulls and females would have to carry at least 15 generations of breed dominant productive dams both top and bottom in the pedigree for reproductive repeatability. Today, their genetics carry these many generations.

All Long cattle, both bulls and females, have been weight performance evaluated and carcass data collected for every calf crop since 1990.

Fred and Judy have dedicated 47 years to the challenge of improving the Beefmaster breed and the genetics within their own herd. The commitment to superior quality and uniformity is the cornerstone of their breeding program.

“First and superior to all traits is visual appraisal this is the X-Factor. It is an extremely important trait in our cattle, they must be structurally sound and ideal in visual quality. If they do not excel in this quality trait, nothing else is important. We then focus on a balance in EPDs and performance, improvement in carcass traits and a uniformity in solid red color of our cattle,” said Long.

The Long’s identify these look alike balanced qualities as “Signature L2” and it’s proven over the years to appeal to both purebred and commercial buyers, domestically and internationally, seeking to improve their breeding programs with consistent and predictable genetics.

To achieve the superior genetics seen in animals such as these, the Longs have remained committed to line breeding and the strength of their maternal herd.

“We like for people to recognize our cattle, and I’ve always believed the only way you can achieve a superior animal with superior qualities is through line breeding. It has achieved our goals in our program.”

They also attribute much of the success in improving their genetics is through extensive embryo transfer work over the years.

“I’ve always thought that Beefmasters were an excellent beef breed and that’s why I joined BBU many years ago,” Fred stated. Long says that the Beefmaster breed has made tremendous amounts of improvement over the past years, and they had the opportunity to participate in such improvement.

L2 has hosted many production sales over the years, but their preferred marketing of their cattle, semen and embryos today is by private treaty. A ranch visit is beneficial and allows the visitors to see cattle that are pasture raised on their mother’s milk and developed in pasture after weaning. Visitors can see like kind performance and predictability with their genetic lines.

Fred and Judy have promoted the Beefmaster breed domestically and with their travels in Mexico and South America. They have hosted many foreign guests with field days and have displayed their cattle at the Houston Livestock Show International Week for several years. Their genetics are utilized by breeders in the United State, Mexico, Central America, South America, and Southeastern Asian countries.

In recognition of their commitment to improving and supporting the breed, the Longs in 2015 were honored with the Live Oak Beefmaster Breeders Association (LOBBA) Legend Award. President Bob Siddons said, “the members of LOBBA and I are proud to recognize them as True Legends of the Beefmaster Breed, together they have produced a herd with L2 bloodlines that are sought after not only in Texas, but throughout the United States and many foreign countries. The L2 Brand is known and respected throughout the Beefmaster breed.”

The Longs appreciate that the satellite sales provide an excellent avenue for the smaller breeder to promote their individual programs as well. The Longs have been avid supporters of other satellites and have been active volunteers within BBU as members. Both have served on the BBU Board of Directors, with Fred serving four terms as Treasurer and Judy serving two terms as Secretary. They both have been active on all BBU committees, working behind the scenes to improve the entire breed and have been instrumental in helping members achieve success within their individual programs. In 1988 they received the BBU Breeder of the Year Award, in 2006 the BBU Environmental Stewardship Award, in 1997 BBU Performance Award, and in 2015 the Live Oak Legend Award. Despite these incredible honors the Longs aren’t ready to slow down yet.

“We are never going to stop being aggressive about making our herd and the breed better. We are very honored that our peer group would recognize us. We really don’t consider ourselves Legends but we do consider our cattle legends. We are still working toward producing better bulls and females. We are always striving for improvement. Judy and I like the challenge and satisfaction of producing better Beefmasters,” Long stated.

“We like it when people buy our cattle and take them home and we get positive feedback. It gives you a sense of satisfaction that you have achieved a better Beefmaster.”

The Longs declared, “to be selected to go into the BBU Hall of Fame is a tremendous honor.”

After 47 years of breeding Beefmasters, it acknowledges the Long family for breeding quality genetics and the continued improvement for the Beefmaster breed. The L2 brand and genetics are satisfaction of such improvement. Fred and Judy are sincerely honored and grateful to be the recipients of this award.